City of La Crosse to Vote on Restricting Religious Freedom 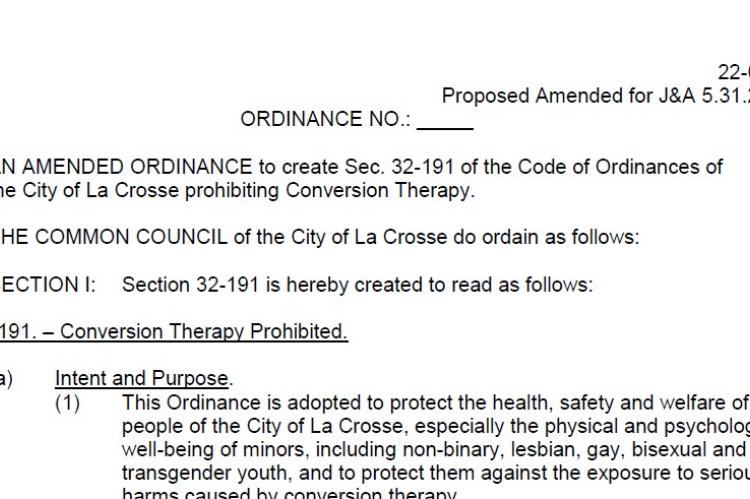 The La Crosse City Council will vote on a new ordinance at their full meeting this Thursday, June 9, at 6:00 p.m. This ordinance will make conversion therapy illegal in the city of La Crosse to anyone under the age of 18 years old. Conversion therapy is described as “any treatment or counseling that seeks to change a person’s sexual orientation or gender identity including efforts to change behaviors or gender expressions or to eliminate or reduce sexual or romantic attractions or feelings of the same gender.”

This will affect every religious institution in the city of La Crosse that has unpaid or paid counselors who parents may ask to talk to children about these issues from a Biblical standpoint.

Everyone is encouraged to send an email to the following email to voice your concerns about this governmental overreach and how it conflicts with first amendment rights of freedom of speech, freedom of religion and the freedom of parents to raise their children with their own beliefs as counseling is an extension of a parent’s beliefs.

This ban on conversion therapy is a nationwide plan to have local governments create ordinances or laws that penalize Christian counselors, pastors, teachers or anyone who disagrees with these issues. If this passes in La Crosse, they will target La Crosse County and other communities next.

<<< UPDATED >>>
There is positive news to share regarding our efforts to get emails out to city council members of La crosse. Many of you have responded to opposing an ordinance that would ban conversion therapy in the city of La Crosse by emailing the city council members to voice your opposition. The good news is that since the push to email the council, we now have almost as many opposition emails as their support emails!!! But since we want to swamp the city council with as many emails as possible, please write a quick email if you haven't already, even if you only write a single line to express your opposition. So, here is the email address: cityclerk@cityoflacrosse.org . Title it, "oppose ordinance Sec.32-191". You can also use the same ordinance# in your email or the reference #22-0636.

Here are reasons to oppose: too broad a definition, infringement of freedom of religion and speech, freedom to parent your child according to your religious beliefs as this ordinance is for counseling children under 18 years old. Also, we have information about a conversation that occurred today with Olivia Herken, a writer for the La Crosse Tribune, regarding her understanding of conversion therapy, the question was asked of her, "What if this sentence was said in the course of a pastor or a Christian, counseling a child, 'God made a man to be a man and a woman to be a woman, what would you say?'" She responded that this sentence would be considered conversion therapy if said during a counseling session with a child.

As an update, normally the full city council will not allow public comment because that occurs in the committee. However, a council member has said there is a possibility that some council members may make a motion to open it up to public comment, which they can do. In light of this possibility, people who can attend the meeting, are encouraged to come prepared to speak. The meeting is scheduled for tonight, Thursday, June 9, at 6:00 pm. I recommend coming a little early.

The Council Passed this at their June Council Meeting on Thursday, 6/9/22 BY ONE VOTE to make the described conversion therapy illegal.

The City Officials often press issues above their authority.

LaCrosse has many elected officials who need to learn that they have no authority on lots of personal issues, only a few of them could quote the meaning and reason of the Bill Of Rights.