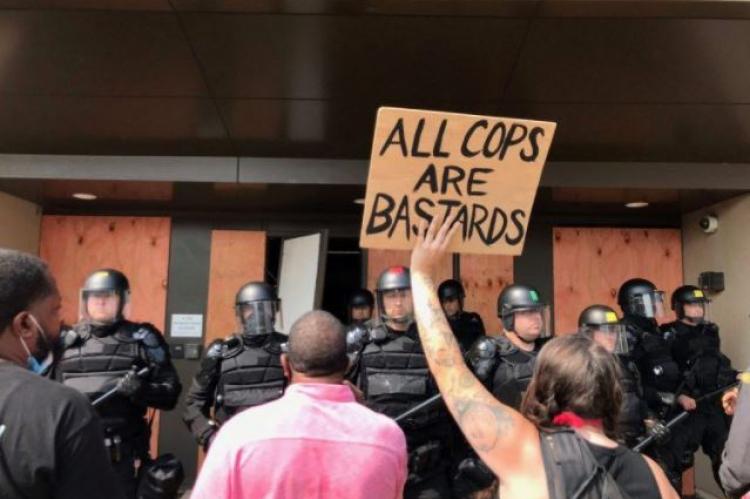 In a video released earlier this week, 1848 Project Rebecca Kleefisch exposed a University of Wisconsin system school hosting critical race theory and hateful, anti-police rhetoric on their website. Following her release of the video highlighting UW-River Falls linking to a document that supports the “All Cops are Bastards” movement, the webpage was deleted.

“This is proof that conservatives can successfully speak out and fight back against this garbage. Our tax dollars shouldn’t be used to fund this,” said 1848 Project President Rebecca Kleefisch. “Critical race theory and anti-police rhetoric have no place in the classroom. Racism is cowardly, no matter how it is cloaked.”

More than a month ago, Kleefisch called for a ban on Critical Race Theory in our schools. Now see what they’re saying about the latest discovery from Kleefisch and the 1848 Project:

From Breitbart News: The University of Wisconsin-River Falls removed a radical “Guide to Allyship” document riddled with Critical Race Theory dogma from the “Diversity, Inclusion, and Belonging” section of its website after a conservative politician brought attention to its contents. Rebecca Kleefisch, who was Lt. governor to former Wisconsin Governor Scott Walker (R), posted a video to Facebook Tuesday, exposing the document for supporting ideas like “All Cops are Bastards,” there are “no good cops,” and “defund the police.”

LISTEN to the segment from the Mark Belling Show

From Wisconsin Right Now: One of the articles, which was linked on the university’s website (which is funded by your tax dollars, in part), bears the headline, “good cops do not exist,” and says, “The claim that individual cops can be good is rooted in white supremacist mythology that suggests racism is an individual act committed by anybody. Policing is not a question of individualism…the institution of modern day policing evolved from the slave patrol system.

LISTEN to the segment from the Dan O’Donnell Show

From Empower Wisconsin: But being an ally to the black community apparently means hating cops, according to whoever thought it was a good idea to tack the outside Google doc on the taxpayer-funded university website. “We must contact those in power and urge them to defund the police, support those fighting on the frontlines in the global protests, and donate to the people and organizations who need it the most right now,” the BLM literature demands.

We are at the worse race relations of my life

Sensationalism is the name of the game nowadays. Things are getting worse not better, and that should not happen. The best thing ever stated on race relations, was by one of my hero's, Martin Luther King. He summed it up perfectly with his statement, "Judge people by the content of their Character, not the color of their skin"

If we all do that, it solves most racial issues. In America, we have countless documents/laws that protect against racial discrimination, more will not help. One of the issues is that the government can't make someone likes someone if they don't.

We need to move forward, and not seek to settle the score, everyone should work to accomplish the Martin Luther King's philosophy.