The Peter Principle & Wisconsin Politics in 2022 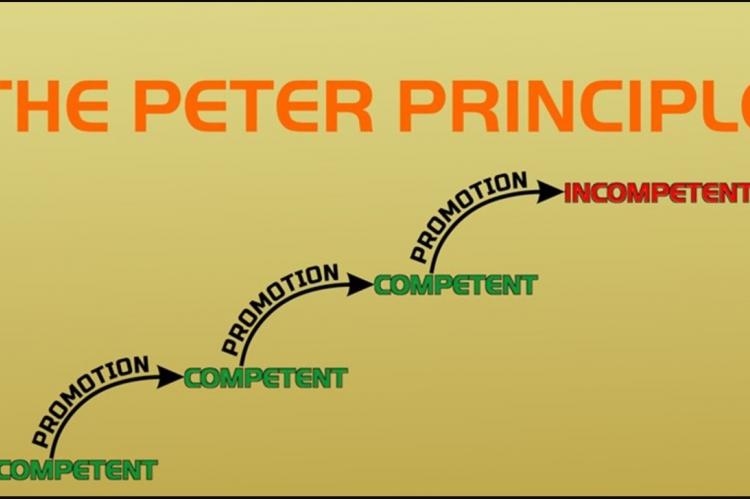 The Peter Principle, first heard about in the late 1960s, was developed by Laurence J. Peter, a Canadian with a Doctor of Education degree, and published in book form by Dr. Peter and Raymond Hull in 1969. The famed Peter Principle is people who are good at their job will be promoted until they reach a level of respective incompetence. Simply put, a successful person is often promoted to one level above his or her level of competence. It is reasonable to think that if you perform well you will be promoted and this action or reaction continues until you are promoted to a position above your ability to perform.

Let us consider the Peter Principle and the Wisconsin political landscape as we approach Election Day, 2022. Former LT Governor Rebecca Kleefisch has previously done a good job as a two-term LT Governor and appeared to be in line for promotion to Governor except the voters in the August Republican Primary thought otherwise -- instead picking businessman Tim Michels to be the Republican nominee for Governor. Michels is a Veteran with success accomplishing executive leadership responsibilities in his family’s rather large construction business. Michels has “run something” while it could be argued that Kleefisch had not.

On the Democratic ticket Governor Tony Evers is running for re-election. After almost a full term as Governor, Evers could be a candidate for poster child for the Peter Principle. In fact with the continual decline in Wisconsin public education, he may have been a candidate in his previous position as Secretary of the Department of Public Instruction (DPI). Given the Governor’s performance in the past almost four years, it appears he has reached a level above his level to perform. He was once a successful teacher and then a government bureaucrat before his elected DPI position.

The current LT Governor and US Senate candidate on the Democratic ticket, Mandella Barnes, appears to be another candidate for poster child for the Peter Principle. His inability to pay taxes and traffic tickets, and his outspoken comments on law enforcement and other politically pertinent topics, hardly qualify him for either LT Governor or US Senator! It appears that Barnes, like Evers, has reached a level above his level to perform. His Republican opponent for US Senate is the incumbent, Ron Johnson. Johnson is already a proven leader in private industry and in the US Senate. For Johnson, this would not be a promotion but rather a public acknowledgement of a “good job – well done”.

State Senator Brad Pfaff, current Democratic candidate for 3rd District Congress, is another candidate worthy of comment and recognition as poster child for the Peter Principle. Pfaff, you may remember, was appointed to be the Secretary of Agriculture, Trade, and Consumer Protection by Governor-elect Evers. After several months as “Secretary-designate”, the State Senate voted not to confirm the appointment. So the question here is if the citizens of the 3rd District want to send a person not qualified to be in the Governor’s Cabinet to Congress? His Republican opponent, Derrick Van Orden, is a retired US Navy SEAL who has proven time and time again that he has been successful at life’s challenges and is ready for more.

Both Mandella Barnes and Brad Pfaff were in the news a month or more ago for problems concerning the ability to follow a campaign finance law. Barnes didn’t think the law applied to him and I did not hear Pfaff’s response. Further, an advertisement for a fund raiser in Monroe County for Barnes failed to have the required “Authorized and Paid for by….” Statement which is another campaign finance violation.

So as you go to the polls on Election Day, November 8th, remember the Peter Principle as you cast your vote for the candidates. We the citizens do not need unproven potential but rather proven experience. This goes for the positions of Governor (and LT Governor who runs on the same ticket), US Senator, Congressman, and the other state-wide candidates for Attorney General, Secretary of State, and State Treasurer.

The Republican candidate for LT Governor is Roger Roth, a current State Senator, an officer in the Wisconsin Air National Guard, and the owner of a family construction business.

The down ballot candidates for State Senate, Assembly, and the County offices deserve the same scrutiny and considerations.

I just love Webster's line "We the citizens do not need unproven potential but rather proven experience." Wow, that is exactly what I am looking for! It seems that many who are running for these positions have what I call a "proven lack of potential" and it is time for a change. Webster is also right with his comments on the great Ron Johnson, that guy has proven he is an American Hero and has my vote, and I hope yours.

Just a couple of thoughts on the comment that Tim Michels is an "outsider" after living on the East Coast due to business requirements.
First, Michels was on the board of the 1848 Project until after he announced for Governor and has also served on the board of Wisconsin Manufacturers and Commerce Association. The 1848 Project is the conservative think tank developed by former LT GOV Rebecca Kleefisch.
Second,, Tim Michels has run for public office in Wisconsin before. In 1998 he lost a primary challenge to incumbent State Senator Scott Fitzgerald. In 2004, after winning a four-way primary, he lost to incumbent US Senator Russ Feingold by a 55% - 44% margin.
Finally, Tim Michels was on the East Coast due to employment requirements and chose to take his family with him rather than become a geographical bachelor and disrupt his family values and parental responsibilities. This exhibit of family values and parental responsibilities should be a positive consideration and not a negative concern.
Tim Michels is a proven Wisconsin business leader who has a blueprint for restoring Wisconsin values to the State of Wisconsin. Vote for Tim Michels for Governor on November 8th!