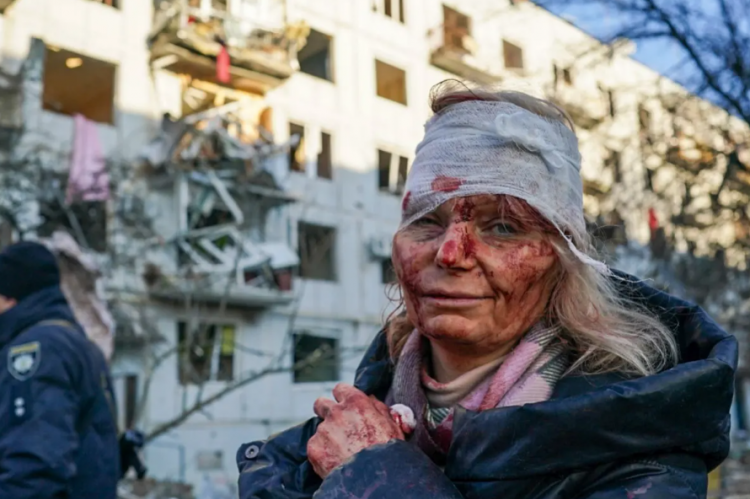 We have a savage maniac loose in the world, now that Putin has threatened nuclear war, if anyone tries to stop him. I guess there are no limits, and no one has stepped up to stop him. Putin is doing exactly what he wants to do, and he will continue, he will move to his next domino and then the next and then the next. No one will stop him as he says that there will be unimaginable consequences, and that threat is nuclear weapons.

So, do we step up now, or do we wait until he controls all of Europe, and who knows what else? We will decide, but when? I don’t have an answer, but fear I am getting close. When I was old enough to understand the holocaust, I did not believe it at first. How could anyone do such a thing? But as I learned more history and grew wiser with age, I finally realized it was true.

Then I thought, ‘How could the world let this happen?’

I know we did not have modern day communications so I can see how it would have taken a long time to learn about it, but still how could we not stop it? Even more concerning, how could Hitler and his followers do such a thing? These people are human, they are like us, it just seemed so hard to understand this massacre, but it did happen.

The world is afraid. We are being bullied by a mad man who is extremely evil. A man who is human scum. After a great deal of thought I have determined that Putin is the first bully in history to successfully intimidate all the world. He has the big stick and indicates he will use it.

To end World War II, America stopped a bully by using nuclear weapons but did not ever use one to bully anyone. America used them for peace, not aggression. The monster Putin has made many threats and has shown no sign of stopping. He is a vicious rat and is struggling with his incompetent offense, but his intimidating comments have allowed him to continue his attack.

So here is where my guilt comes from: why are we allowing this mad man, Putin, to selfishly kill and harm thousands of human beings who were minding their own business, taking care of their families and living their lives just like you and I? It took a while to learn of the Holocaust, but this war on our neighbors could not be clearer, and as Pastor Martin Niemoller said,

I appreciate Justice4sum's question "Modern Day Holocaust?" and his follow up question "How could the world let this happen?.
In the mid-seventies my wife & I visited Bergen-Belsen Concentration Camp near Hanover, Germany where Anne Frank and 50,000 other prisoners died. When the camp was liberated in 1945 it held 60,000 prisoners. At one point, the British Army which had liberated the camp had to use bulldozers to bury the corpses in the many mass graves.
About a decade ago we visited the United States Holocaust Museum in Washington, D.C. (www.ushmm.org). Memories of the visits to Bergen-Belsen returned. And, as we went through an exhibit on propaganda and government distrust, we compared that to the then current situation in the United States (it was in the middle of the Obama Administration).
Now, we have the despicable Mr. Putin seemingly repeating history. Today it is Ukraine, and I would guess Poland tomorrow. And our socialist-democrat President and his administration lack leadership. Many have asked what President Trump would have done; and others have answered that this would not have happened with President Trump in the White House! The current administration just does not get it!
Putin's justification is Ukraine was once part of the Russian empire. Wasn't Alaska?
Finland and Sweden get it! Their political leaders are wanting to join NATO before Ukraine falls. Poland may be Putin's next target but Finland and Sweden are probably on his list!
So, I will repeat the question "How could the world let this happen?"

We must not forget!

My dad, and his two brothers were all in WWII, my dad being the youngest lied at age 17 to go help his brothers who were both heroes, and both wounded with horrifical stories, but did come home.
I bought a Mazda pickup truck in 1987, because it had a great reputation, and it was cheap. I swear this is true, I painted out the word Mazda on my mud flaps so it could not be read, and covered the word on my tailgate. I was ashamed to have a truck made by the Japanese, the people who invaded America, and still today I have some animosity.
Here is my promise, I will not ever forgive the Russians, their leader is a mad mad, and evil, and while most it is not the fault of the citizens, they will have to pay the price for what their leader is doing. The world must demand it, and they need to know it now.