Democrats Tee up Another Violation of Your Rights 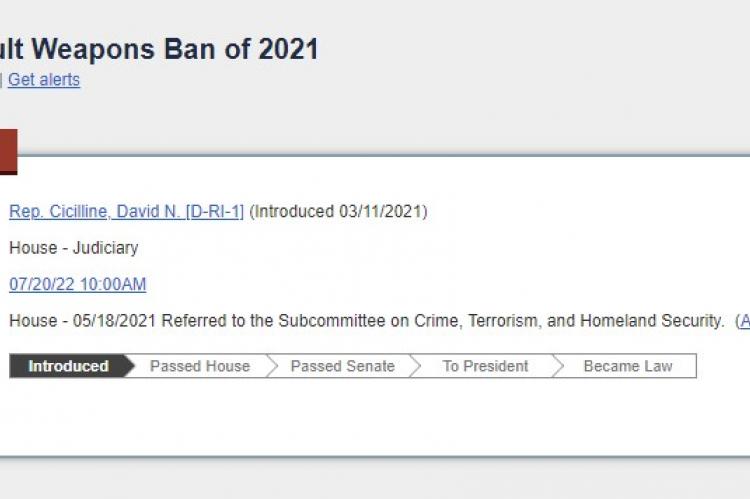 House Democrats have announced they will schedule a vote on more violations of your Second Amendment (2A) rights. You can find the summary and other details of the bill here.

In the summary, it states that,

What on Earth is a LCAFD? I have been using firearms for decades and I train with many different variations of pistols and rifles. This is the first time I have ever heard the term 'large capacity ammunition feeding device.' Is this their diabolical way of using such vague terminology that allows bureaucrats to define it however they like? Will the ATF decide that 'large capacity' is anything greater than 15? or 10? or 2? The Supreme Court of the United States (SCOTUS) recently ruled against the EPA for making up rules out of vague language regarding carbon dioxide requirements. The wording in this bill is even worse and I foresee the ATF using it in an effort to infringe on our rights.

The summary goes on to explain,

What does it mean to be 'securely stored?' Is this another diabolical way for the Marxists to make it more difficult and expensive for law abiding citizens to afford the equipment to exercise their 2A rights? What is the poor young woman supposed to do when her crazy ex-boyfriend threatens her and she cannot afford the right equipment to protect herself?

What is a licensed gun dealer? The previous bill that passed Congress and signed by the President made just about anyone who sells a firearm a gun a dealer.

Conducting a background check during every transfer, even a private one, can only be enforced if the bureaucrats have an accounting of every firearm. Is this a back door way to getting a national gun registration requirement so they can later confiscate them?


"The bill permits continued possession of, but prohibits sale or transfer of, a grandfathered LCAFD."

Will I be imprisoned if I give my child the gift of his first rifle when he turns 18? Here in Wisconsin where we have a long history of hunting sports and self reliance it is common practice to learn how to safely and responsibly use firearms and hunt at a very early age and to give our children firearms as a right of passage when they have proven to be responsible with them. This bill is worded in a way that might outlaw those rights of passage or make them far more difficult to participate in. It is a direct violation of our Liberty.

Will my beneficiaries be imprisoned if they take possession of my firearms when I go to Heaven?

The next statement from the summary which raises concerns is,

This will increase the cost to produce firearms which will increase the cost of buying them. Here again is another diabolical back door method that Marxists use to infringe on our 2A rights. They make the prices go up so it becomes harder to exercise our Liberty. The poor are left defenseless because they simply cannot afford the equipment. As I mentioned above, how is the poor young adult supposed to defend themselves when they cannot afford the equipment? How many young women will be raped and murdered as a result of Democrat policies like this.

I strongly encourage all of you reading this to immediately call your representatives and tell them to oppose this violation of our Liberty. I welcome you to send the link to this article to them so they can understand the concerns we have about the details in this legislation.

Beating a dead horse, and time to speak up.

These idiot democrats need to realize that they are playing with fire. The criminals don't follow gun laws, never have, and never will. But if the Dems keep beating us law-abiding people with continued assault on our Constitutional rights, they are going to see millions of law-abiding citizens stand up and say enough, and we are not going to take it anymore. I don't know what you call that other than a rebellion, but this will happen and we will win! So you more gun law people, it is time to learn we are not currently your enemy, you will need us some day!