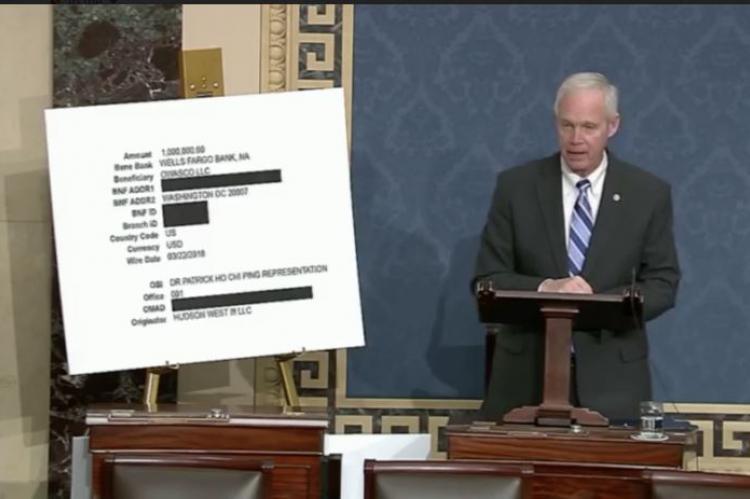 For two days this week, I spoke on the Senate floor to discuss the investigation that Senator Chuck Grassley and I have conducted into the web of foreign financial entanglements of the Biden Family and how the mainstream media published countless stories reporting on the Democrat's false charge that we were soliciting and disseminating Russian disinformation.

The media's coverup of Hunter Biden's laptop revealed the biggest dirty trick in United States history, aided and abetted by the mainstream media and the Democrat party.

Hunter Biden's company received $1 million from CEFC, a company that was effectively an arm of the communist Chinese regime. The head of CEFC was Patrick Ho. Who is Mr. Ho? Hunter Biden referred to him as the "[expletive deleted] spy chief of China."

The corporate media tried to bury Senator Grassley's and my report about Biden Inc. Fortunately, facts are stubborn things. We will continue to provide the American people with the truth.

Watch: Sen. Johnson on Fox News' "Hannity" and Newsmax's "Stinchfield": "This is the Sleaziest Thing I've Seen in Politics"

What happened to Walter Cronkite? We can get the news, but most of it is overwhelmingly spun by the left, the right has news, but it gets no traction in the mainstream news. Hunter Biden and others, are corrupt, President Biden is who encouraged this to happen. If Biden was not the American Vice President this would never have happened.
It takes a great deal of courage to do what Ron Johnson is doing, he gets ridiculed, by the left, and many people can't sort out who has the facts, there are those who believe what the media says, and accepts it as gospel.
Now we have one of our top senate officials, giving us the facts, but now we have the same old problem, Walter Cronkite is not here to tell us the plain truth, but if he was he would lay out the facts and say "and that's the way it is"