Hundreds Turn Out at Racine County Rally for Tim Michels 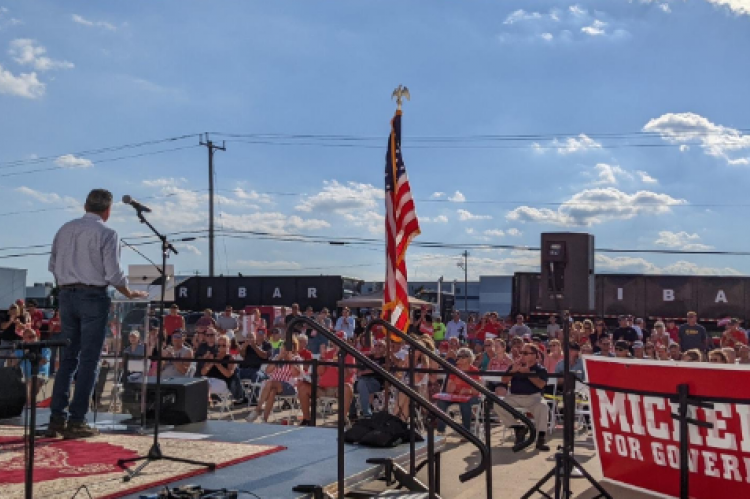 It was a blistering hot day with temperatures approaching 90°, but that didn’t stop an enthusiastic crowd of nearly 300 supporters of Tim Michels from rallying with the candidate late Monday afternoon in Mount Pleasant.

Before Michels took the stage, attendees were entertained by the band Koltrane. Sue Lynch, who has been a conservative activist for decades and who had been with Kevin Nicholson’s campaign, addressed the crowd and offered a vigorous and enthusiastic endorsement of Tim Michels, a former 12-year U.S. Army Ranger Officer and successful businessman.

Fresh off his 11 stop tour of Northern Wisconsin, leading in the polls and surging toward the August 9th Primary, Michels provided rally goers with a blistering criticism of failed Governor Tony Evers.

Michels is the only candidate in the race to reject PAC and Lobbyists’ contributions, and he told the crowd the Madison insiders are in panic mode and throwing desperate and lie-filled attacks at him in one last sad attempt to maintain control.

After his speech Tim shook hands and spoke with the many families in attendance. The team was able to help a few first-time voters register and hundreds of yard signs were distributed, which will push the number of displayed signs to more than 21,000 to date.

Go to MichelsforGovernor.com for updates about the campaign, including future rallies and visits by Tim.

This in interesting politics, and I think Michel's is sincere.

Let the Cream come to the top, and please avoid the mud, and that is meant for all candidates.