How to Destroy a Nation 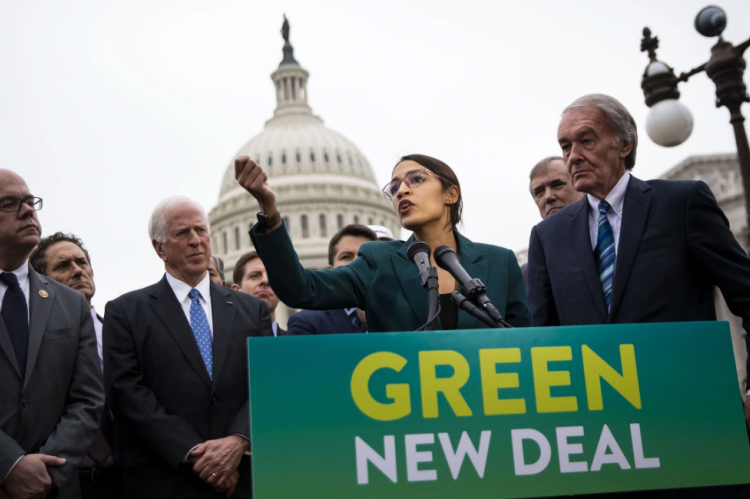 I quote from the web site of the Green Party, U S; https://www.gp.org/gnd_full , the first paragraph:

"The Green New Deal will convert the decaying fossil fuel economy into a new, green economy that is environmentally sustainable, economically secure and socially just. The Green New Deal starts with transitioning to 100% green renewable energy (no nukes or natural gas) by 2030. It would immediately halt any investment in fossil fuels (including natural gas) and related infrastructure. The Green New Deal will guarantee full employment and generate up to 20 million new, living-wage jobs, as well as make the government the employer of last resort with a much-needed major public jobs program."

Food is a pretty big deal for each of us if there is a shortage. We have farmers - in this state - who raise crops on land measuring in the several hundreds and including over a thousand acres. You don't have to be a genius to see how much food will go missing when his machinery sits idle. Idle because there is no fuel to power a machine weighing multiple tons. On the plus side, that farmer will have need to hire hundreds of people to turn the soil, plant, and cultivate crops until they can harvest them. Rest assured, food will get a lot more expensive!

After the food is set to be on its way, you have problems. Combustion engines (CE) are used to transport it. CE are used to keep it cool so that it does not spoil before it gets to a distributor; to another CE (with another CE) to take it to the grocer where it will be cooled with "100% green renewable energy". But! All of the trains, in this part of our country, are powered by diesel fuel. All but a very few trucks are powered by diesel fuel. (Some, such as Kwik Trip's, are powered by compressed natural gas. Drat! Another fossil fuel.) How do you send a tanker truck of milk from Sparta to Chicago? - - - Where I'm sure that there will be a shortage is food from all sorts of other places. But, there will be a demand for electric trucks with electric coolers that will stop every 100 miles to recharge with 100% green renewable energy. Sorry Chicago - if the wind stops blowing or the sun sets and the food spoils. (I don't think much food is produced in Chicago by the millions who live there. But what the heck, they'll have living-wage jobs - - - or a government employer of last resort. No mention of living wage.) All dressed up and no where to go. Jobs! And little to eat.

Lest I forget, Tires for trucks are made from petroleum. All of those nice smooth interstate, state, county, and town / city roadways are greatly constructed with asphalt. Yup, you've got it; petroleum - - again! I think that would be called 'related infrastructure'. Why is this a problem? Because, asphalt is a by-product of processing crude oil into gasoline and diesel. No product - no by-product.

Come to think of it; you might want to make friends with the Amish, buy a one man log saw and axe with a wood burning stove, and hand gardening tools and caning jars for your yard (instead of mowing it with a push mower). You can just forget about two day old lettuce at the grocers or restaurant.

Shortsightedness: In transitioning to 100% green renewable energy by 2030, there will be no jet fuel in 10 years. Under 10 years, it will become very hard for people to vacation by airline travel due to phase out. The very legislators, who work to implement the New Green Deal, will have to move their families to D.C. because travel to their home state will be prohibitive. Question; how do you get a 747 airplane (360 tons - without passengers) into the air by using '100% green renewable energy'?

As one who voted for Democrat presidents from '60 through '92; as a retired member of Carpenter's Local 678, Dubuque; as a grandpa to 10 and great grandpa to 2 (the future); as an American I urge an overwhelming rebuttal to the whimsically strange plan called the Green New Deal - AND the legislators who promote it. Voters have the ability to mash this like a grape in a wine factory. Defeat this plan and bury it under a rock because following this plan will doom the economy while having enhancement effect on the rest of the world's countries that will NOT follow.