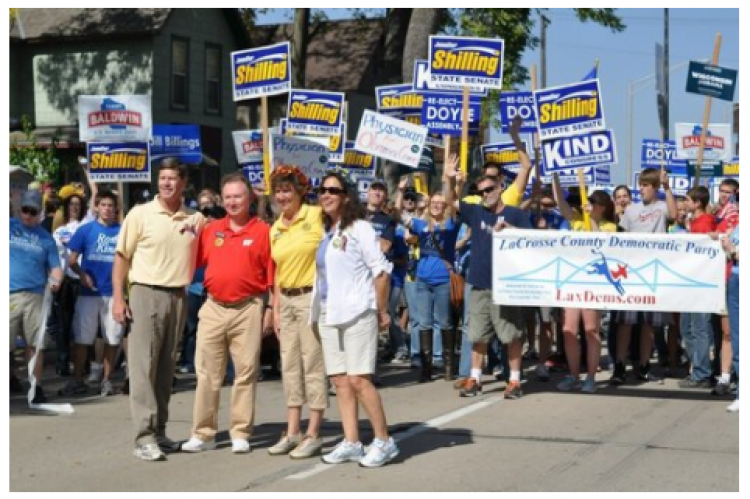 We alerted you to the disgusting legal practices of Steve Doyle. Now, additional media outlets are picking up the story and spreading the word.

Wisconsin Media Spotlight is reporting on the details here.

The volunteers here at CouleeConservatives.com are continuing to investigate deeper into this scandal and it looks like other investigations are under way too. Did Steve Doyle violate state ethics laws by performing this work on taxpayer time? Did his wife, Judge Gloria Doyle, violate state ethics laws by hearing a case that was being worked on by her husband? Were any quid pro quo deals made in the process? Do Ron Kind, Jen Shilling, and Jill Billings (all pictured with Steve Doyle in the parade photo) approve of Steve Doyle's legal practices?

---------- NEW REVELATIONS ----------
Our volunteer investigators were able to contact several of the victims of Steve Doyle's legal dealings. For the sake of their privacy and to protect them from further legal retaliations by Steve and his hate-filled Democrat allies we will NOT reveal the identities of these brave souls. Several chose not to be included in this report but the following gave me permission to briefly tell their stories:

"Mindy" is a middle-aged mother of two and recently divorced from an abusive husband. She fell on hard times when she became ill and had trouble paying her medical bills. Steve Doyle sued her and now she is even deeper in debt and pursuing bankruptcy protection.

"Jamal" is a night clerk who struggled to get a G.E.D. and lives paycheck to paycheck. When Steve Doyle sued him he was forced to take on additional jobs to pay his bills and had to drop out of a community college program that he was hoping to make a career from.

These are REAL people living in our community and they may even be your very own neighbors. Steve Doyle claims to have empathy and compassion in his campaign advertisements and printed materials but the reality is very different. The truth is that when Steve Doyle puts on his slick looking lawyer's clothes you can be sure he will be ruthless and unforgiving. He is a two-faced fraud who uses the government to come down on the vulnerable members of our community.

We ask that you reach out to your neighbors who may have fallen on hard times and assist in any way you can to help. The most effective way to help people is to personally take care of their needs since the government will never care about them the way their neighbors and friends can. With people like Steve Doyle in government it may even be dangerous and do more harm.

Bending the rules and an incumbent.

Here is one more question. Doyle's radio ad seems to blend the aid from his office for constitutes, and then uses them to promote his candidacy. I suggest this needs to be looked at. I am referring to the ad where the person can't get unemployment help, but calls Doyle and then gets lots of help, and then says in the political ad Steve is great.
There are more examples also.