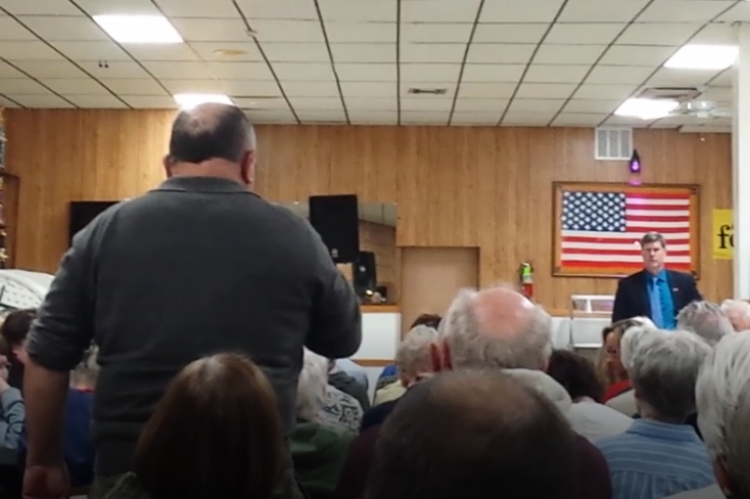 La Crosse Democrat Calls for Removal of the President

Neither WKBT nor WXOW saw fit to report on the real news from Congressman Ron Kind's (D-La Crosse) listening session: the insurrection mentality of the unhinged Democrats. Instead, the local media outlets did puff pieces that could be considered fake or pandering news. The REAL news that the media refused to report was that one of the La Crosse Democrats in attendance asked the congressman to lead a coup by fraudulently invoking the 25th Amendment to un-seat the duly elected President of the United States. The man who voiced that opinion received enthusiastic applause from the room full of Democrats (most of whom supported Bernie Sanders). To his credit, Kind refused to dignify the man's rant with a response and I wonder if that gentleman will receive a visit from the Secret Service just to be safe. (Be sure to visit and subscribe to the CouleeConservatives.com YouTube channel where we will publish video from this event so you can make your own judgments)

The La Crosse Tribune partially covered another Breaking News item from the listening session but they brushed over it with only a partial quote from the congressman: We were attacked on Nov. 8, 2016, with foreign influence on our election process. Here is what Congressman Ron Kind of La Crosse REALLY said at the town hall meeting:

At least the New York Times got this part correct in their coverage of the event.

The Democrats are totally unhinged. For a congressman to compare moments of history when American citizens and service members were savagely murdered leading to open warfare with an election where their candidate lost requires a certain level of insanity. It is patently delusional to believe that there is a Russian-led conspiracy behind every corner but it seems like that is where the Democrats find themselves and it concerns me that they are continuing to feed the insurrection mentality of their grassroots followers. People are going to get hurt or even killed eventually if this kind of reckless rhetoric continues.

In a separate rant that we published on our YouTube channel, Kind is definitely tip toeing on the thin line of illegality by suggesting that United States intelligence professionals should illegally leak secret information to the public when they disagree with the president.

"The intel community knows how to get their story out and that's what the administration needs to be careful of."

That veiled threat by Kind should get his security clearance revoked if he has one and I wouldn't be surprised if the FBI contacts him to discuss his apparent willingness for classified information to be leaked in violation of the law.

These unhinged Democrats must come to grips with their devastating loss in the November election. They are flailing around in their quest for answers that will satisfy their over inflated egos. Maybe in time, after their egos have deflated sufficiently, they will realize that Americans are simply sick and tired of all their B.S. and government solutions. We the People spoke very loudly in November: get the government out of our way!

I pray they learn this simple lesson before people start getting hurt as a result of their irresponsible, violence inciting, rhetoric. Unfortunately, I fear they will continue to encourage the insurrection mentality within the Democrat Party all to satiate their hatred for President Trump who handily defeated their anointed candidate. We are already witnessing violence at protests throughout the nation and it will only get worse with Democrats like Ron Kind fanning the flames.