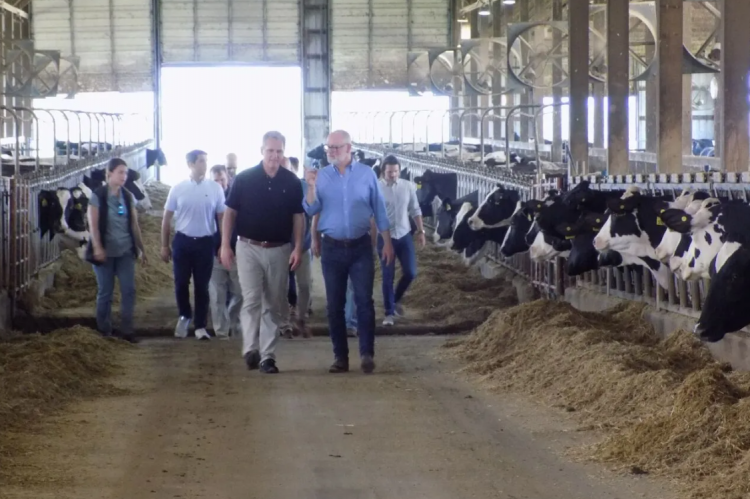 Leader McCarthy got to see firsthand the impact that the failed Biden agenda is having on Wisconsin farmers, something I am seeing every day as I travel the 3rd District.

Take a look at some of the coverage from yesterday below:

WXOW: Rep. McCarthy joins Van Orden for farm visit “In Wisconsin 90% of all dairy farms are small farms, family owned,” McCarthy said. “They’ve been generation after generation and it’s very difficult for them to survive and that’s what they’re concerned about.”

Mr. Van Orden also citing the current hardships facing farmers every day including the price of fuel, fertilizers and feed. The policies of government help were also an issue Van Orden said was a Democratic failure.

McCarthy adding that in Washington, Republicans are always ready for some common sense solutions.

“It’s very difficult for farmers, especially smaller farmers, to survive when energy and spending levels and prices go up,” McCarthy said. “As an American, we all care about the quality of our food especially here in Wisconsin.”

As a result, Morning Star Dairy owner John Schaller says Wisconsin’s farmers are paying the price. “Yes, the price of milk is more expensive for people to buy in the store. Yes we are getting more for our milk naturally because everything is inflated. But to produce that milk we got more expenses too. Fertilizer fuel and what not,” Schaller said. “So it’s just inflated dollars they’re playing with and it’s gonna blow up in their faces real quick if they don’t get this under wraps.”

The policies promoted by Democrats running Washington are not good for farm families in Wisconsin, according to Republicans on a Wisconsin tour Monday.

“In Wisconsin, more than 90 percent of all the dairy farms are small farms,” McCarthy, who serves a farming area near Los Angeles in Congress, said. “They’re all family-owned, and this is what they’ve been doing generation after generation.

Maaaan, you are one pathetic loser!!

...or are you just trolling? We're interested in thoughtful discussions here so if you want to troll then please do so at Fakebook.

Hey Eddie, I may have missed something?

I see this article as sincere people looking to help the farm and American economy. The discussion is very real and accurate, and if the farmers fail, America will have a very broken link. I have a few questions Eddie, what do you think of the fuel cost in America? What happened, just two years ago it was less than half, I assume you don't drive so did not know about that. But out here on the farm we have massive fuel and fertilizer costs this year. We also have good prices, but that is because the Trumpster got some great trade deals with Canada and Mexico, and the rest of the world also. Glad you are reading this site, it is a public service to preserve what is left of America. Chime in anytime and you might be surprised to know we enjoy all participants as long as we remain civil.