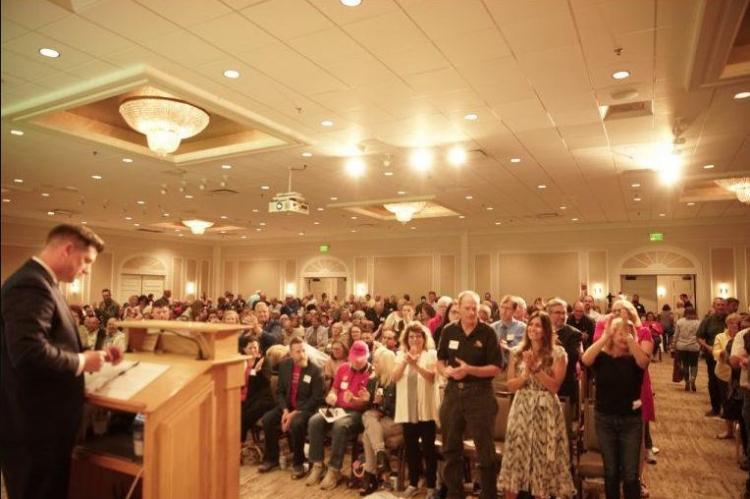 PEWAUKE, Wis. — Parents and residents across Wisconsin and around the country are fed up, and standing up to schools, governments, and corporations that are making the mistake of incorporating elements of Critical Race Theory (CRT) in their curriculum and trainings.

On a summer evening in Pewaukee – when there were certainly many other things they could have been doing – roughly SIX HUNDRED people joined our first No Better Friend Corp. Forum on the Plague of Critical Race Theory. The event featured three distinguished speakers – Dr. James Lindsay, Mike Gonzalez, and Adam Coleman – who helped to arm our audience with the tools needed to identify Critical Race Theory, to stop it, and to build a better future for us all through focusing on the truth. That means explaining our nation’s history with full context, and building on the decency of the human spirit.

To be clear, Critical Race Theory’s roots are in cultural Marxism, and it is an attempt to permanently divide the people of our nation on the basis of race. Do not simply take my word for it; look to Xi Van Fleet, who grew up under the regime of the Chinese Communist Party. She said that the regime, “used the same critical theory to divide people. The only difference is that they used class instead of race.” She is right, and the American people should look past the manipulative attempts to divide us by the “woke” amongst us, and think about the gravity of Xi Van Fleet’s warning.

Think only conservatives are worried about the cultural rot that is Critical Race Theory? Barrington Martin II – a Georgia Democrat who ran for the U.S. House in 2020 – believes that Critical Race Theory is a demeaning affront to black Americans. Civil rights activist and political independent, Bob Woodson, opposes requiring critical race theory in public school curriculum, because it teaches “helplessness” and “black-self-doubt and self-destruction.”

Critical Race Theory is an attack on us all – an insidious attempt to undermine the very foundation that our Republic was built on: individual liberty and accompanying responsibilities. America is a place where you reap what you sow, for better or worse. Our self-governing and free Republic cannot coexist with a philosophy that attempts to replace individual accountability with collective assignments of guilt based on the sentiments of political and cultural elitists. The proponents of Critical Race Theory know this, and see CRT as an opportunity to destroy our nation’s cultural and political cohesion. And our No Better Friend Corp. team will continue to shine a light on this every time we see it.

We are also excited to announce that our featured guests will include well-respected biotech entrepreneur and author of the much-anticipated book, WOKE, INC., Vivek Ramaswamy, who will be one of the speakers at our next forum. As he wrote in a recent New York Post piece, he is, “fed up with corporate America’s game of pretending to care about justice in order to make money.”

It is time to fight for the future of our state and country. Please join us on August 11, from 7-9 pm, at Lake Windsor Country Club in Dane County.

In the meantime, the advocates of Critical Race Theory should more closely consider how they will personally fare when placed under a historical lens that will correctly lump them together with other nefarious actors who have tried to divide Americans on the basis of race to gain political power. Put simply, that’s a club that no one should aspire to join.

EDITOR'S NOTE:
Kevin Nicholson is a businessman, a Marine Corps Veteran, and the Volunteer President and CEO of No Better Friend Corp.

I hope we can get through this.

Where do we draw the line? If my brother robs a bank, are they going to put me in prison? I guess it is possible that I had ancestors who had slaves, and now they are saying I am bad. I have relatives fight to end slavery, does that help ease my level of quilt?

People should forgive people when they are sorry for bad behavior, if we don't we only increase hostility. CRT is launching a new wave of racism, that will be worse than anything we have seen since the 1960s, we need to stop this vicious attack on our young people and adults.