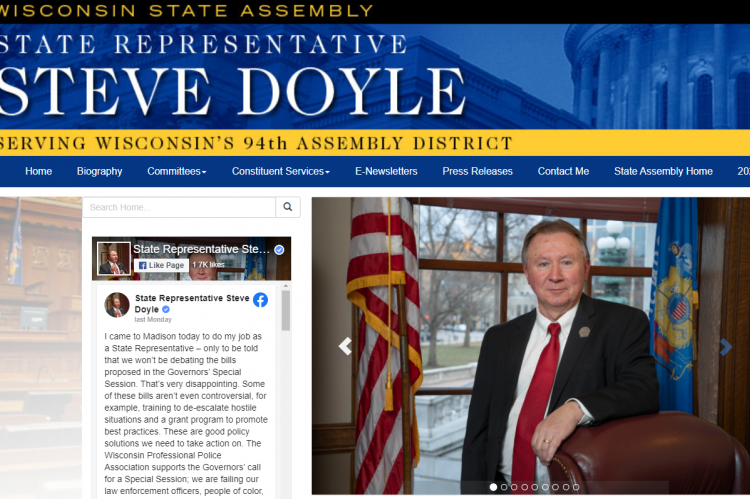 According to public documents, Steve Doyle is spending his time suing poor people who are running into hard times due to medical conditions. A recent story by the La Crosse Independent also highlighted this issue recently but that article failed to point out Doyle's role in this practice of kicking people while they are down.

In their article, they point out the La Crosse Mayor’s effort to convince Gundersen Health System to ease off their efforts to sue poor people who have a hard time paying their medical debts.

My sources who are familiar with the details directed me to the evidence that Steve Doyle is one of the lawyers assisting Gundersen in this effort. You heard that right. The same Steve Doyle who represents the 94th Assembly District in Madison, sits on the County Board of Supervisors, and can be heard on local radio touting his experience as a llama farmer or on T.V. playing with puppies is also a lawyer in his day job and obviously doesn’t mind working on behalf of a large corporation who pays him to sue poor people.

At first I couldn't believe this was true. When my sources came to me I was surprised. When I started to dig deeper into the public records I found case after case proving it all to be true. And it gets even worse. In our study of public records we found multiple court cases totaling more than $260,000 that Steve Doyle sued from poor people who might have otherwise used those funds to help out their grandchildren or start a business or any number of other things. Unfortunately, lawyers like Steve Doyle are always lurking in the corners ready to pounce at every opportunity to sue poor people who have fallen on hard times. Who will be his next victim?

Just how much more two-faced can a person be? How many poor, sick people have been forced to declare bankruptcy because of Steve Doyle’s legal actions against them? How much money is Steve Doyle paid to ruin the lives of these poor people? Has Steve Doyle ever performed these legal actions during the time when he is supposed to be representing us in Madison? When will Steve Doyle present a full accounting of all the time he spends on this so we can compare the records to his duties in Madison and ensure there is no conflict with his role as a representative? What about his role as a County Board Supervisor? Is he triple dipping on the tax payers of La Crosse County, the tax payers in the 94th State Assembly district, and getting a fat check from a law firm?

The deeper we looked into this issue the worse it became. Not only is Steve Doyle suing poor people out of their hard earned money, his wife, Judge Gloria Doyle may be in on it too. According to the public records we found, approximately $35,256.30 in judgments came to Steve Doyle in cases where Judge Gloria Doyle is listed as the "Responsible Official."

Our team of volunteer investigators has only scratched the surface. Many questions still need to be answered about this. The people in Steve Doyle’s district deserve answers.

From Poverty to Prosperity Through Liberty
Nov 22, 2020 - 09:03
END_OF_DOCUMENT_TOKEN_TO_BE_REPLACED