By Rep. Robin Vos
Time to read
1 minute
Share
Print
a- a+
Published 6 months ago
Last updated 1 month ago
Read so far 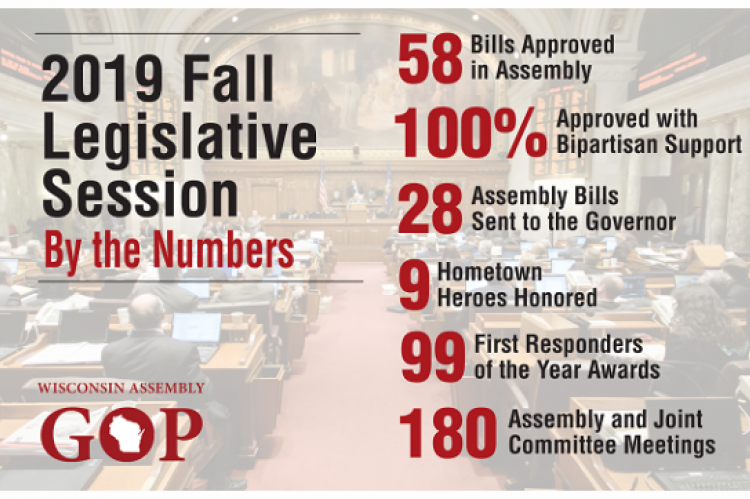 The Wisconsin State Assembly had a busy and productive fall legislative session. The Assembly approved 58 proposals, all of which received bipartisan votes according to an analysis by the Legislative Reference Bureau. I take pride in the fact that in the legislature, we're working together to address important issues in our state.

This fall, the Assembly passed a package of eight bills to help with the growing problem of suicide in Wisconsin. The legislation came from the recommendations of the bipartisan Speaker's Task Force on Suicide Prevention that was chaired by Representative Joan Ballweg of Markesan. The centerpiece of the package is the creation of a Statewide Suicide Prevention Director to help coordinate prevention services. The legislative package also includes requiring high schools to place the suicide hotline number on the back of student IDs, providing grants for peer support groups in schools, and expanding training grants. These bills are now in the Senate for consideration and several bills had public hearings this week.

The Assembly sent a total of 28 bills to the governor from the fall legislative session. Assembly Bill 73, the elimination of the Miller Park Tax, was just signed into law. The sales and use tax will officially end in August 2020. In addition, a stricter penalty for repeat drunk drivers is now in place. 2019 Act 31 requires a five-year mandatory minimum sentence for an individual convicted of OWI homicide.

Two bipartisan bills were vetoed by Governor Evers. Assembly Bill 249, which was approved by both chambers on a voice vote, set forth criteria for honorary highway and bridge designations. The bipartisan bill was intended to preserve the integrity of the tradition of honoring worthy individuals in our state and was widely supported in both chambers. Unfortunately, Governor Evers prioritized politics over good policy.

Also disappointing was the veto of a bill to help address the shortage of nursing aides. Assembly Bill 76 brought Wisconsin's CNA instruction requirements in line with federal standards and those of many neighboring states. At a time when our state has a ever-growing demand, it's sad to see that once again, Governor Evers cares more about politics than anything else.