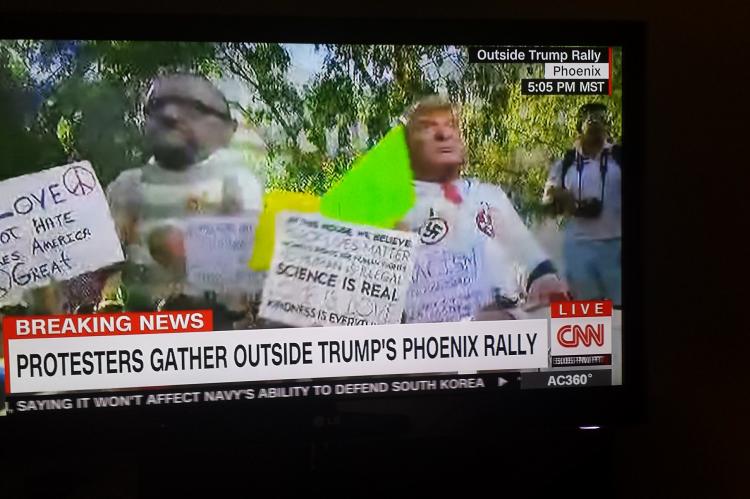 Children's author, Hans Christian Andersen, wrote The Emperor's New Clothes. It tells how a couple of unscrupulous tailors convinced the emperor that they could spin such a fine fabric that could be seen by only advanced people. (He couldn't but those in his court said that they could.) His subjects were afraid to contradict him. Then he held a parade to show off the new clothes to the likewise pretending townsfolk. Without warning, an innocent child called out, "He has no clothes!" Because of pretentiousness and social pressure, people (not all) will pretend to know or agree on some issue. They actively engage in convincing themselves of their 'truth'.

There is a precept in sociology that says that the more a group of people think alike; the more radical they become. A motive: They agree with things because it makes them look better in the eyes of the group. The images of protesters comes to mind with the chant, "This is what democracy looks like!". They are unruly, cause damage, and get arrested. And, they are right; that is what democracy looks like - - government by the mob. Thank God the founders were guided by Providence to provide us with a republic! (Stop and mentally review the first words in the Pledge of Allegiance - - ". . . and to the Republic for which it stands . . .".)

Since 1960, I voted for Democrat presidents up to and including Clinton (once). Progressives have taken over more and more and the party left me. (Kennedy would not be accepted in today's party. A couple of years ago, I heard a recording of a speech by Hubert Humphrey that could fit the values of some Republicans.) Progressives showed us their true values during the Judge Kavanaugh hearings; there was no presumption of innocence. (See Schumer 9-25-'18.) They even tried to have Kavanaugh testify first; a violation of confronting your accuser in due process. (See 5th and 6th Amendments.) This is the type of law that you would see in a tyrannical government!

(Further - under a tyrannical government - you would have a political organization invest in an outside group to create unsubstantiated allegations, leak it to the press, and go to a FISA court to get a warrant for the government to spy on the opponent. If people don't go to jail over these events, you may as well kiss the Constitution good bye! Those people were Progressives in the leadership of the FBI. I told this to Rep. Kind during a listening session held at the American Legion in Tomah. He answered but he had no answer.)

I was about to start this paragraph with another rip when it came to me; (apology to HCA) They have no clothes. We have hit the jackpot with Trump and Walker. Gross Domestic Product increases have been above and near 4% these last two quarters. Unemployment has been on the decrease with more people working than ever before. There are millions more jobs available than there are people looking for a job; wages are on the rise. Applications for Medicaid are down. Walker is on a recruiting drive to bring more well qualified people into the state with focus on retired military, neighboring states' college alumni associations, and a proposed tax credit of $5,000 for new college graduates who stay and work in Wisconsin. We have a president who has made great progress in trade agreements and national defense (What happened to the worry about North Korea and the ICBMs being able to strike our mainland? - - - No guarantees; but then we had none before - and proliferation was increasing.)

The words of a song from my youth (Perry Como) came floating through my mind; " You gotta accent-u-ate the positive,
E-lim-inate the negative, An' latch on To the affirmative. Don't mess with mister in-between! You gotta spread joy up to the maximum,
Bring gloom down to the minimum, An' have faith (amen!), Or pandemonium's Liable to walk upon the scene!